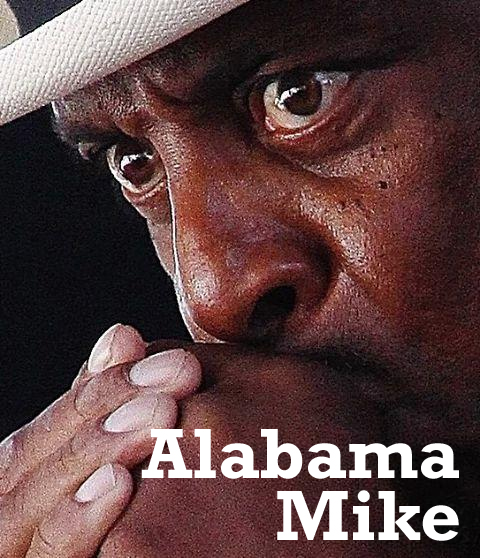 Alabama Mike is a hard-driving blues singer who will remind you of the early original blues legends, whom you may have heard on the Chess, Duke, Trumpet and Galaxy Record labels, and even maybe some Elmore James, Buddy Guy, Little Junior Parker, Little Johnny Taylor, and BB King (in his early years). He can blaze up a good old blues shuffle and have you moving and grooving, then effortlessly transport you through his unique style, offering a soulful gospel tinged ballad, and his jovial style of storytelling will send you through a range of exhilarating emotions.

Born in Talladega, Alabama, in 1964, and is now based in the San Francisco Bay area, Alabama Mike is a rising star, having won Best New Blues Artist 2010 from Bay Area Blues Society, and also nominated by the Blues Foundation (Blues Music Awards ) for Best Male Traditional Blues Artist 2011.

Alabama Mike is definitely a great singer, performer, entertainer and a master songwriter, who is now being introduced to larger audiences around the world. He has played festivals all over the United States, South America and Canada, and is looking to tour internationally again in the coming months. He was nominated in 2014 for Best Acoustic Blues CD by the Blues Foundation, spotlighting his CD titled UNLEASHED,  by the Hound Kings, (9 Below Records) a trio composed of Alabama Mike, Scot Brenton and Anthony Paule. His latest April 2016 release is titled, Upset The Status Quo, (Jukehouse Records) featuring Jerry Jemmott, Jim Pugh, D’Mar Martin, Kid Andersen, and Kedar Roy, which has established Alabama Mike as one of the most prolific blues songwriters and performers alive today. During the last two years, he has toured the country with the Andy T Band, featuring the “Texas Blues Guitar Legend,” Anson Funderburgh.

Alabama Mike has definitely become the voice of the West Coast Blues, aka The Future Of The Blues. More recently, he has been been making guest appearances playing harmonica with the R&B legendary group Toni! Tony! Tone’ and playing  festivals backed by  Anson Funderburgh & The Rockets! Also, some of his latest collaborations are with the Arizona-based blues harmonica ace, Bob Corritore, on  his 2019 “Do The Hip Shake Baby”(SWMAF / VizzTone), on which Alabama lends his vocal prowess on four tracks. He has also worked with Kim Wilson and many other highly regarded California-based musicians on his 2019 release Hip You To My Blues, on Jon Atkinson’s Big Tone Records.

Alabama Mike also tours with his own band called, The Mighty Revelators.